Historic evidence suggests that Inzolia has been introduced in Sicily between the 8th and the 7th century BC, during a massive migration from the Greek islands to the Western areas of the Mediterranean.
The reasons for those migrations were essentially related to economic factors: the growth of their population far beyond the capacity of their limited arable land was perceived as a constraint to further development by the small Greek city-states, which started to settle colonies in all directions, fostering a wide net for mercantile exchanges between the mother land and the new settlements.

Greek colonies were founded from Asia Minor to Northern Africa, and from Southern Italy to France and Spain, and newcomers eventually melted with the peoples already settled there. Many of the native populations were indeed very progressed: the Punics, founders of the ancient Carthage in modern Tunisia, or the Etruscans, in Central Italy, were advanced civilizations that could guarantee highly lucrative trades. Moreover, the demand for cultivable land and other natural resources (minerals, wood) were key factors that pushed to a large-scale expansion.

The Greeks were able merchants: they brought with them not only their know-how in construction (remember temples and theatres?) and agriculture, but also their laws, culture and life-style, of which wine was one fundamental component. 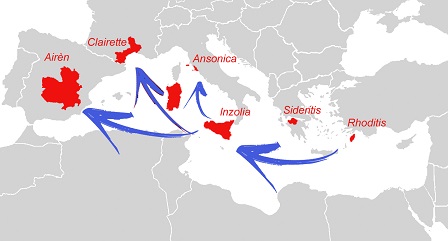 The symposium, or the activity of drinking together as a social habit, the ceremonial offer of wine to gods, the sacred status of the foreigner, who should be welcomed with ritual libations: those habits were introduced to the West by the Greeks together with several vine varieties, originally domesticated in Mesopotamia and Caucasus by 6.000 BC and subsequently adapted to many of the Greek islands.

Inzolia is one of those varieties: recent studies show that modern Inzolia is genetically linked to two Greek grapes, Rhoditis and Sideritis, which were originally grown in the island of Rhodes and around the city of Patras and are considered to be fathers to different western grape varieties as Airèn in Spain, Clairette in France and Ansonica in Tuscany.

Inzolia is a polyclonal variety, two main biotypes of which are currently being studied by agronomists. Other than Sicily, it is grown in Tuscany, in Calabria and Sardinia. Its preferred terroir is on the Western coasts of Sicily, in the golden triangle between Agrigento, Trapani and Palermo, but it can also be found in limited quantities on the Etna slopes, and in the provinces of Messina and Ragusa.

Inzolia is quite a productive variety, resistant to drought and to the most common vineyard’s diseases especially if grown close to the sea, where the saline environment helps the vines to defend themselves from mildew. Bud break is generally tardive, about the first decade of April, and grapes ripen in mid September.
Clusters are quite big, berries have a golden yellow thick and tannic skin, with a compact crunchy pulp. 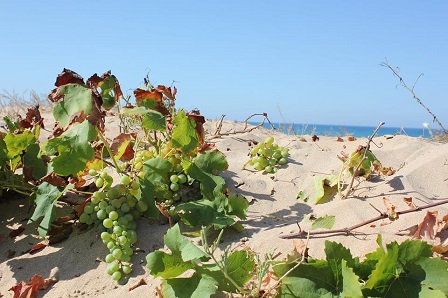 Inzolia is known for its low acidity, and for a rather modest sugar content. Two qualities that require a great ability and winegrowing experience in order to determine the right moment for the harvest, when the phenolic ripeness of the grapes is balanced by acceptable levels of natural acidity: if harvest is delayed – looking for a higher sugar concentration – the risk is to pick insipid grapes that will lead to flabby, non interesting wines.

The vocation of terroir plays a central role in obtaining high quality Inzolia. For instance, phenolic ripeness generally occurs lately on the hills, when the Inzolia grapes’ natural acidity is below an acceptable degree.
On the contrary, at lower altitudes and close to the ocean, the sea brine (which is most evidently a distinctive feature of some terroirs) is able to compensate the soft quality of the Inzolia juice, enhancing the wines with a savory character and a fresh saline finish.

Inzolia is so much a part of the natural environment in Menfi that a few specimens of pre-phylloxera vines have been recently discovered right on the sandy beach of Porto Palo (read more here), thus acknowledging this small village as one of the most traditional and suitable terroirs for growing Inzolia in Sicily.

Citrus, white flowers and ripe fruit notes are the main characteristics of Inzolia wines: when they combine with saline, herbal and menthol hints enriched by an almond finish, then you will drink terroir in a glass and appreciate a surprising complexity.

Enjoy Inzolia on any moments of the day: as an aperitif, with risotto and light pasta dishes, with vegetables and soft cheeses: its smooth gentle body matches perfectly with crustaceans and all seafood, which sweet yet saline taste would be damaged by highly acidic wines.

Serving temperature should be cold but not chilled, about 50-54 °F (10-12 °C), to boost the wine’s iodized notes without shrinking its pleasant aromatic expression. Inzolia is at its best when enjoyed young, one or two years after the harvest, but the finest bottles made in the right terroirs can graciously evolve up to 3 or 4 years, developing a pleasant nutty aftertaste.

Want to know more about Inzolia?
Watch and download the complete infographic by clicking on the picture.
Feel free to use any of the information and pictures included in this article for your studies or presentations, by citing the source.

Keep in touch and get updates and insights into the Sicilian world of wine!

Home
Who I am
My wines
Sicilian Grape Varieties

Arts and culture
Nature and landscape
Wine, food and hospitality
My family recipes

This site uses cookies and third-party cookies to provide you with a better experience and service.
When navigating or using our services, you agree to our use of them. You can change your cookie settings at any time.