Inzolia is a beautiful Sicilian wine that has amazing aging potential: notes from a vertical tasting of Cantine Barbera Dietro le Case

Last Friday I spent a wonderful night with my friends with the AIS Association.

We showed a vertical tasting of Dietro le Case from 2006 to 2010, which opened a rich and interesting debate among our guests. My purpose was the following: as the Inzolia is often considered a flabby and somewhat ordinary wine, which is not able to age, I wanted to understand if this statement is true, or it comes out from a prejudice. And the main reason for doing so is that I just love this grape...

The following notes are a short résumé of what has been said during the tasting, I tried to write them down trying to summarize all comments, doubts and questions about the wines. 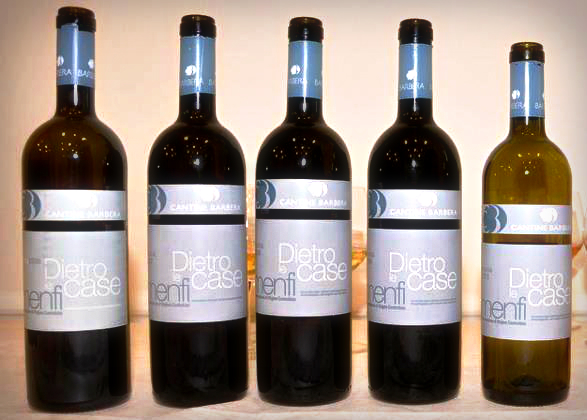 Dietro le Case Menfi DOC 2006: first vintage. Six years ago we decided to separately harvest and ferment the grapes of the old Inzolia vineyard, which is planted behind the old farmhouses in our Belicello Estate. The vines’ clones are quite unique: being selected from my grandfather Lilly in the early ’20, they have been reproduced several time throughout the years and adapted to our territory since then.
The wine’s color is deep golden yellow; its smell is rich and intense with aromas of nuts and honey; on the palate it is full and very long lasting. This wine was everybody’s favourite. Suggested match: foie-gras and cheeses.

Dietro le Case Menfi DOC 2008: very warm vintage, quite similar to the 2006. The wine’s color is a bright intense gold. To the nose, we recognized broom’s blossoms aromas with fresh hay hints; to the palate, a very bright marine character. Suggested match: first courses based on fish.

Dietro le Case Menfi DOC 2007: the less interesting of all vintages. A very fresh and rainy season slowed the grapes’ ripening process, so the wine seems younger than the 2008, but it is also less complex. The color is lighter, the nose is more delicate, but also quite fading. A slim and dry body is not persistent enough. Not bad, but unfortunately not very exciting.

Dietro le Case Menfi DOC 2009: this vintage is similar to the 2007 for the climate, but the wine has a fresher and more mineral character that helps very much during the tasting. A fine and delicate nose of wild herbs, and a lot of saline notes, white pear and almond blossom. To the palate, the wine is pleasant and long lasting. Suggested match: fish, sea food and shrimps.

Dietro le Case Menfi DOC 2010: here we go, this is the wine that opened the discussion!
The wine was so different from the others that I silently kept laughing to myself. Very aromatic, it is similar to the 2006 vintage for its intensity, but has also a surprisingly herbaceous nose, with hints of sage and wild oregano, somebody said wild fennel. Incredibly persistent and mineral, with a slightly bitter note at the end that rinses the palate, leaving a fresh and clean finish.
Everybody asked why there is such a big difference. The answer is simple: the winemaking is absolutely the same as the previous vintages, but who fermented in 2010 is indigenous yeast, that was used in all fermentations of white and red wines.

From now on, to whoever will tell me that indigenous yeast actually does not exist, that who ferments at the end of the story is always the infamous saccaromyces cerevisiae, I will answer: try this wine, it will prove you are wrong.

And, I also learnt a huge lesson from tasting with all the friends who came to last night’s event: an early harvest is not always a good idea, especially in the freshest vintages. The grapes that grow in the Dietro le Case vineyard are so intense and complex when they are fully ripe that it is worth losing some acidity: the ocean and its fresh salty breeze will compensate enough.

PS: pictures of this article property of Enonews Periodico, the complete photobook is on Facebook.

Keep in touch and get updates and insights into the Sicilian world of wine!

Home
Who I am
My wines
Sicilian Grape Varieties

Arts and culture
Nature and landscape
Wine, food and hospitality
My family recipes

This site uses cookies and third-party cookies to provide you with a better experience and service.
When navigating or using our services, you agree to our use of them. You can change your cookie settings at any time.